When you see a Persian rug that has a signature on it, you know you are looking at something truly special. Not all Persian rugs have signatures on them. 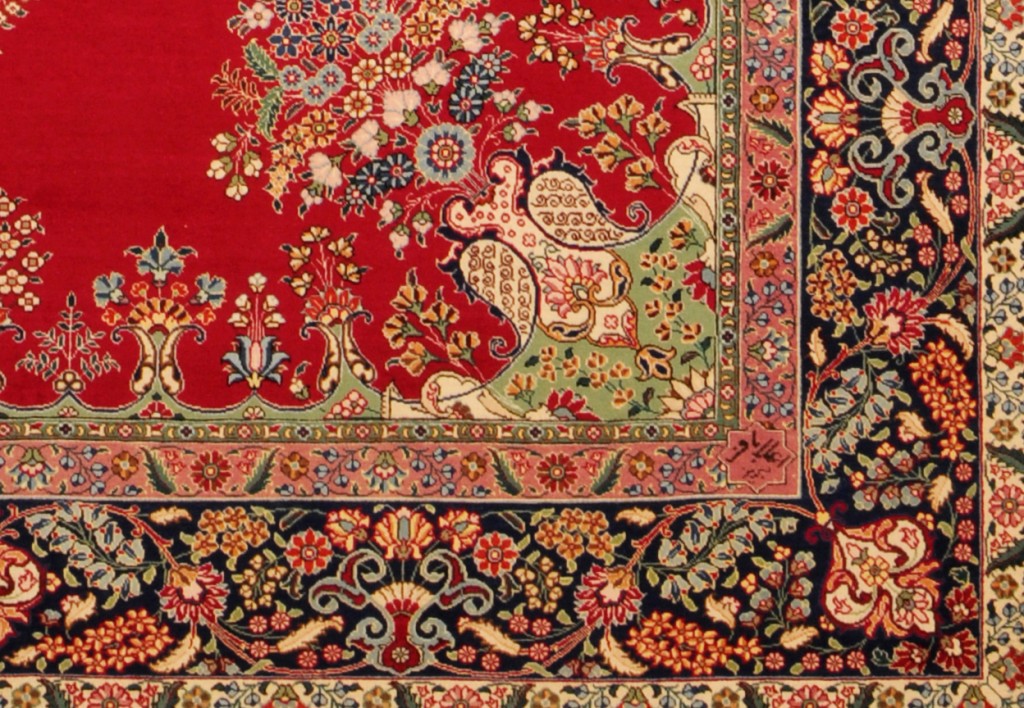 Only very few pieces that are painstakingly created by master craftsmen have this special feature on them. There is no mistaking the superiority of these rugs, whether it is in their flawless craftsmanship, the fine quality of the materials used or the outstanding design and color combinations.

Signature rugs are not manufactured by just any ordinary weavers on home-made looms. These rugs are manufactured in special workshops that are owned and operated by a few people who take great pride in their creations and who will not approve of any rug that is anything less than perfect. These workshop owners oversee every aspect of the weaving process and make sure that all processes are in total synchrony so that the end result is 100% perfection.

Let’s go over are 3 Famous Workshops

A BRIEF HISTORY OF “ALABAF” RUGS

There are certain Tabriz rugs that are signed by “Alabaf”. These rugs have a long history going back 120 years.

The pioneer of the Alabaf weaving tradition set up the first workshop in the family backyard where these iconic rugs were manufactured for 40 years. After this time, it was moved to a new place, which had less than 100 looms. Upon his death in 1949, four of his seven sons took over and continued their father’s work.

They operated quite a large workshop with 1000 weavers and workers working on more than 300 looms. The hard work of three generations has made the name “Alabaf” a source of pride for the Persian Rug industry.

The Alabaf family was at its peak as a high quality producer between 1948 and 1990. The third generation of the family continues the tradition of weaving rugs till today.

They sourced their wool from the Golpayegan area, which was generally considered to have the highest quality of wool in Iran. The majority of designs were created by two of the best designers in Tabriz, Mir Mosavar Arjangi and his son Manochehr Arjangi. 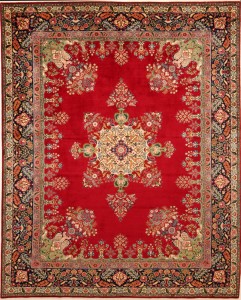 A BRIEF HISTORY OF “ASTAN GHODS”Rugs

Prior to the revolution in Iran, rug producing was not a primary activity of the company. At that time, they only took on selective orders for weaving rugs. Most of the rugs that they manufactured were for the prestigious “Imlklam Reza Temple”, which is located in Mashad. In addition to the rugs that they produced for the temple, they also manufactured a select few pieces on special order, some of which were in very unusual sizes.

The AGR rug company became well established about 4 years after the revolution. On their board of directors were a few well-known rug dealers from the Mashad area. The board of directors does not get paid for their work with the AGR company. Their work is completely voluntary, mostly driven by their love for the rug industry.

AGR manufactured rugs are generally priced higher in the market but that is fully justified for several reasons. Only the highest quality wool and dye are used in their creations and only the best weavers are selected to work on the pieces.

AGR rugs have earned a reputation for aging well and looking increasingly better as they age.  Most of their designs are flowers with or without a medallion. This organization takes good care of its weavers and artists with good salaries and other benefits.

A BRIEF HISTORY OF “SABER” Rugs

Saber started his rug weaving work over 70 years ago in relatively large workshop in Mashad. He also had several looms scattered in and around the suburbs of Mashad. At the peak of his career, Saber had around 60 looms, in which he produced most large size rugs.

You will rarely find a Saber rug that measures less than 12 square meters. Mashad Saber rugs can be found in allover design as well as medallion design. Some pieces were also made with Turkeman design on special order. All of these rugs are one-of-a-kind .

Some of the Saber pieces are quite like the Mashad Amoghi rugs. They are very tightly woven with a zigzag design on the outer sides of the border.

Even after Saber passed away about 25 years ago, his master weaver Bazmi continues manufacturing rugs with “SABER” signature