Traditional Sarouk rugs (Sarough rugs) are produced in the Sarouk village, located about 25 miles north of Sultanabad, which is now known as Arak. These rugs are also known as Saruq or Sarough rugs.

Although the region was known for producing rugs since early time, it rose to prominence somewhere around the late 19th Century.

A Sarouk rug is a type of Persian rug made in the Sarouk village of Iran. Sarouk was renowned for its carpet weaving industry in the late 19th and early 20th centuries. The most coveted of these rugs are made by a Farahan, a 19th century designer. He was so well renowned, till today these rugs are often called Farahan Sarouk rugs.

Farahan started designing these rugs to compete with the popular Kashan rugs, but he did not want to copy them. In order to differentiate between the two, Farahan introduced medallion motifs in the center. The Mohajeran Sarouk rugs made their appearance sometime in the early 20th century.

Hand Knotted Persian Sarouk  or Sarough rugs are very attractive and are considered as one of the highest quality rugs originating from the well established Arak weaving district in central Iran.

The prominent center medallion motif that is the hallmark feature of Sarouk rugs was first designed by Farahan, a famous designer who hailed from the Sarouk village. His idea was to introduce a unique design that would compete commercially with rugs being produced in other neighboring regions. These highly stylistic center medallion motifs became hugely popular and were soon adopted by all Sarouk rug weavers. Weavers created central medallions in a variety of shapes including the famous sunburst-shaped motif. With their exceptional craftsmanship and harmonious design elements, rugs bearing this design have a special place in history. Known as Antique 19th century Farahan Sarouks, these rugs are in huge demand all over the world.

Genuine antique Farahan Sarouks are very rare. A 19th century in good condition is a collector’s item and a fantastic investment.

The Difference Between Farahan Sarouk and American Sarouk Rugs

Farahan Sarouks are vibrantly colored rugs that are semi-formal in their designs. Steeped in character, these rugs are renowned for having a balanced design and will invariably have a curvilinear element woven into their design.

Farahan Sarouk rugs have a distinctive design featuring an elaborate central medallion surrounded by intricate and finely woven curvilinear floral motifs. Some rugs featured birds, trees and other types of foliate in pictorial designs. The combination of the large central motif and the smaller, densely packed curvilinear designs surrounding it gave these rugs a stunning, eye-catching appearance. Another feature of Farahan Sarouk rugs is the close-cropped, tightly woven pile.

Some Sarouk rugs have extremely tight weaves, which make them difficult to fold the rug because the tight weave makes them more rigid. Such rugs are used solely for decorative purposes but can be part of an antique rug collection, as well.

Josan Sarouk rugs are the less expensive type of Sarouk rugs. These are known for their irregular shape and design and loud colors.  Josan Sarouks are coarse to touch.

Around the 1920s to the 1930s, the time period between the two World Wars, Sarouk rugs were being produced mainly for the American market. However, while there was a huge demand for Sarouk rugs, the Americans were not too impressed by the colors used in the original creations and explored ways to adapt the colors to their taste. This gave rise to a rug re-dyeing industry in American around the 1950s where thousands of Sarouk rugs were transformed to cater to American tastes.

Farahan Sarouks paved way for Mohajeran Sarouk rugs in the 20th century. These rugs have a formal appearance and were created to fulfill the high demand from European customers.

The Story Behind Washed And Painted Sarouks

The rugs were first put though a chemical process that stripped off the original colors. They were then re-dyed by hand to colors more pleasing to the American market. Deep burgundy, blues, greens, and yellows are some of the more common colors that were used to create these re-dyed rugs, which came to be known as American Sarouks. These dyes did not stand the test of time as well as the dyes used in the original Sarouks.

To solve this problem, New York rug dealers of that time, painted the colors back on the rugs using synthetic dyes and paint brushes.

It’s easy to distinguish antique Farahan Sarouk rugs from American Sarouk rugs by taking a closer look at the styling and dye used in the rug.

These rugs can be differentiated from Farahan Sarouks by their airy designs that are more focused on blossoms and trees. In fact, the willow tree motif is ubiquitous to Mohajeran Sarouks. Medallion motifs that are common to Farahan Sarouks are not found in Mohajeran Sarouks. Also, the colors were different, as Mohajerans use a lot of reds and blues. The colors are always in paired in an inverse manner. So, you can find a Mohajeran with a red body and blue border or vice versa.

In the mid-20th century, Mohajeran rugs were renamed as American and European Sarouk rugs. These rugs had motifs consisting of floral sprays throughout the rug and were woven using single weft weaving to make them more affordable and commercially viable.

Materials And Texture Of Sarouk

Most Sarouk rugs have a cotton foundation and a wool pile. There are some variations in the material used for the pile but the foundation is almost always cotton. The cotton material gives the rug a sturdier foundation and makes the rugs more durable too. 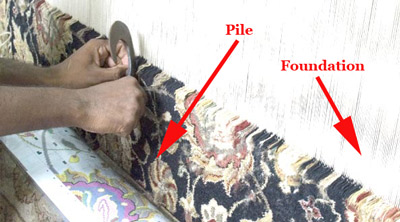 The pile is thick and lush with a soft luxurious feel that can be attributed to the high quality of wool that is used. The higher knot density also contributes to the lush, luxurious feel of the pile.

Another factor that adds to the softness of the pile is that only natural extracts are used to dye the wool. Natural dyes only color the wool without damaging the wool fibers unlike chemical dyes that can damage the soft wool fibers. Wool dyed with chemicals are usually harsh and hard.

The weavers mostly used symmetrical Persian knotting in the construction of Sarouks but you can find a few antique Sarouks constructed using asymmetrical Turkish knots.

Most rugs are large sized. The pile is usually left thick and long resulting in a dense rug that is very comfortable, plush and durable. Some of the older pieces feel smooth and velvety to the touch. On the cotton foundation of these rugs you can see distinct blue wefts, which is one of the hallmark features of these rugs.

The motifs were usually outlined in light red, turquoise or light yellow to create contrast between the background and the motifs.

It is believed that that the fame gained by the Sarouk rugs is owed to few colors that is used in these rugs.

The doghi ronas color of Sarouk, or blush red, blue color from Farahan-Sarouk, and ronasi color from Moshk-abad are considered to be the reasons behind the fame of Sarouk rugs. In addition to the mentioned colors, green, beige, gold yellow, and hay color are among the colors used in Sarouk rugs.

Generally, ronas, or madder roots, wine leaves, pomegranate peel, walnut outer shell are among the natural material used in dyeing the Sarouk persian rugs wool. The fine dyeing of the wool is also a significant factor beside the type of the dyes in Sarouk rugs.

Sarouks are woven on a cotton foundation and can be curvilinear or geometric in pattern. The most characteristic features of Hand Knotted Sarouk Persian rugs are its weft threads in blue, salmon color mixed with blues and ivory and brightly colored, disconnected floral sprays that may or may not have a central medallion.

Traditional Sarouk designs consist of gul hannai, boteh or herati motifs. These were incorporated into the rug either in an all-over pattern or in a medallion layout that could be diamond, hexagon, angular, round or oval shaped.

The fields in the older pieces also featured tree of life designs blended together with other trees such as the willow or Cyprus and sometimes realistic animals woven in between.

The newer pieces are slightly different in that they typically feature a large sized medallion with pendants or sometimes multiple concentric medallions on the field.

After World War I, another type of design, called the American Sarouk design started becoming more popular. This design consisted of detached floral sprays that appeared to be branching out from a floral medallion or a medallion-like centre.

These versions usually have an open field, which is similar to the modern Kerman rugs.

While all Persian rugs are well known for their opulence and beauty, antique Hand Knotted Sarouk Persian rugs are the best representations of these traits. The rugs are sturdy, strong and dense and do not wear or damage easily.

With their exceptional appearance, high quality and ability to withstand decades of wear, Sarouks continue to be a best seller among Persian rugs.

All Sarouk rugs are hand knotted. In the early years, weavers used only the symmetrical knotting technique but in later years some rugs were made using the asymmetrical knot in which the yarn is placed in a loop around one warp and left loose under the other warp. Although different, both weaving techniques produced rugs of the highest quality.

Sarouk weavers produced rugs in a wide range of sizes to fit all types of spaces.

Those are not the only sizes however. You can find Sarouk rugs in several other dimensions too.