Mashad rugs originate from Mashad, the capital city of Khorassan, a large province that lies sprawled across northeastern Iran. Mashad is also one of the oldest cities in Iran.

The city of Mashad was also called Mashhad or Meshed. The rugs that originate from this city are known as Mashad rugs or Meshed rugs. 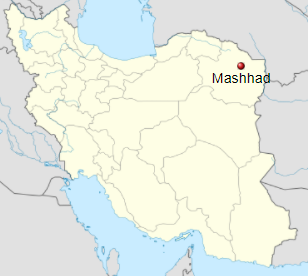 Khorassan rugs are much sought after around the world because of their high quality and characteristic designs. Rug weaving in this region can be traced back to the Timurid Empire somewhere around the late middle ages.

In the ensuing years, Masad became one of the most prominent weaving centers in the industry. Some of the finest Persian rugs come from this region.

The city of Mashad is also home to one of the most important religious shrines in the country. This has had a lot of influence on the patterns and designs seen in the rugs woven in this city.

The rich agricultural land in the area provides lush vegetation for the sheep to graze on, which explains why the quality of the wool produced here is second to none.

Antique Mashad rugs are one-of-a kind grand floor pieces produced in large sizes especially to adorn royal palaces in and around the region. Master-weavers of that era took great pride in creating rugs in elaborate patterns and vibrant colors befitting their royal environment.

Geographically, Mashad is located across the desert, far from most other populated regions. Because of its relatively isolated location antique Mashad rugs were not influenced by external factors. The rugs featured strictly traditional designs, patterns and colors that were brought to life by local Mashad weavers. These are the perfect type of floor pieces for anyone looking for a truly authentic Persian rug.

It was only during the later years when access to other regions became easier that weavers started to get influenced by other cultures and this began to show in the designs and colors used in the rugs.

Mashad rugs produced in later years are partly influenced by the growing demand of the western market.

With easy access to high quality wool Mashad rug weavers don’t need to look far for materials to use. The soft, lustrous wool that is sourced locally makes for a great start to produce their superior creations. Weavers typically use a combination of cotton and wool to give their rugs the best qualities of both materials.

Before the materials are used in rug making, they are dyed using colors extracted from all natural materials. Mashad rug weavers have mastered the art of extracting dyes from vegetation and other materials found locally.

Some of these plants and materials are only found in the Khorassan region. This is one of the reasons why Mashad rugs have some unique colors that you won’t find in other types of Persian rugs.

For example, the bright red color that is used in Mashad rugs is extracted from a plant that only grows in this region.

You’ll rarely see this shade of red in rugs from other regions. Vibrant purplish red, deep magenta, intense blue, cochineal, dark browns and different shades of green are some of the other unusual colors that can be seen in Mashad rugs.

Mashad rugs are generally large in size although you can find them in various sizes. They have a wool pile woven on to a cotton foundation. The wool used is soft and of very high quality and the pile is tight and thin, giving the finished rug a very soft but sophisticated look.

The rugs are woven using a Persian, asymmetrical knot that is over 4 warps rather than the usual 2 knots that is used in most other weaving techniques. The knot count could range from about 120 kpsi to 475 kpsi. Weavers use an unusual technique alternating between straight and sinuous wefts, which forces the foundation on to two levels.

The wool used in Mashad rugs is softer than that found in most other types of Persian rugs. It is soft and lustrous while still retaining its hardy properties. With its long, soft pile Mashad rugs feel soft, luxurious, and comfortable to the touch.

The all-natural extracts that are used to dye the wool help the wool to retain its softness, unlike chemical dyes that often tend to ruin the natural softness of wool.

The cotton foundation supports this soft pile and provides the rug with much-needed sturdiness and durability.

When you buy a Mashad rug, you don’t have to compromise between a delicate look and durability. You get both in one piece because of its clever combination of materials.

Mashad rug weavers use a Persian, asymmetrical knot, a type of weaving technique that’s different from the types of knots used by rug-makers from other regions. In this weaving technique, one half is knotted around a warp tightly, the other half is left loose.

This style of weaving allows the weavers to pack the knots more tightly together resulting in a higher knot count. The higher the knot count of a rug, the denser the pile and the more valuable the rug.

Using the asymmetrical weaving technique, weavers can construct as many as 120 to 475 knots per square inch, which is a higher knot count as compared to several other Persian rug types.

The foundation is created on two levels by alternating between straight and winding wefts, which is another unique feature of Mashad rugs.

The colors of Mashad rugs are non varying and most use exclusively red and blue as the dominating colors with ivory or khaki used to provide interesting contrast.

The background is typically deep, dark red with dark blue highlights found in the center medallion, corner pendants and border. The red background is a distinguishing characteristic of Mashad rugs.

With their high quality, soft wool, bold colors and stunning design elements, Mashad rugs are in high demand all over the world.

Moreover, the construction techniques that are used to create these rugs make them sturdier and longer lasting, which are qualities most people look for when they are investing money in a rug.

Mashad rugs have several design elements that are common with Kashan rugs, with only very small differences between them. However, Mashad rugs have one unique feature that helps distinguish between the two and that is their elongated corners. In the Mashad rug layout, the corners are so elongated that they sometimes touch or almost touch near the center of each border on each side of the rug.

Other motifs that the Mashad weavers use in addition to the Shah Abbasi motif are boteh and herati motifs. Unlike the single, large, central Shah Abbasi motif, botehs and heratis are smaller and woven in a repeated, all-over pattern.

During the early years, weavers usually produced large sized, majestic rugs that occupied a prominent place in spacious palace rooms. Through the years, rug makers started creating a variety of sizes to cater to a growing demand by Western countries.