Qualifies for Free Rug Padding
Only 1 in stock

For example: when other weavers would stick to designing scenes of animals or royalty (when creating pictorial rugs)…

… the Tabriz weavers would take historical or religious stories and weave them into the pictures on their rugs.

And it features a historical scene, with the story of Moses.

Otherwise known as “Moses and the Bulrushes” or “Moses Saved From The Waters” and other names.

Originally Created For A Church

The pattern was designed by a Armenian group in Tabriz, and was originally created for a church, but for some reason it didn’t end up at its intended destination.

Instead, it was acquired by a private collector, and 100+ years later — this beautiful piece of art — managed to make its way to America and now hangs proudly in our showroom.

The main focus of this rug is the scene with Moses, but the border also deserves mention.

Because it features a “Tree of Life” pattern.

The symbol for Growth & Connection. Spirit and Harmony.

So the border represents a bigger theme: Moses reconnecting with the world, and with it, a chance for growth & expansion… and as such; reflects the same opportunity back to us, (the viewer of the rug).

Subtle And Realistic Colors Of The Rug

The colors in this picture rug are subtle and realistic.

With blues and gray and a touch of rust and brown.

The darker colors were chosen to convey the moods of sorrow and sadness (for finding Moses in a basket, in a river, alone) with lighter colors for happiness (at being found) and hope for a brighter future.

All colors are vegetable dyes and naturally reveal all the delicate details and intricate weaving in such a well designed rug.

In fact, this rug looks so good, you could easily frame it.

But you won’t know until you set eyes upon it.

Learn more about Tabriz Rugs in our Rug Encyclopedia.

Free Rug Concierge Service – Buy any rug and anytime you want your rug cleaned, repaired or both.

Simply contact us and we’ll get your rug picked up, taken care of and returned to you.

Activated from the day of your purchase… good for the lifetime of your rug! (You just cover the shipping cost and workmanship, at cost price, no-mark-up).

Certified Authentic – every rug has a lineage and can be traced back to when and where it was made.  Which enables us to appraise each rug and certify its authenticity and value. You’ll get a “Certified Authentic” Certificate for insurance or resale purposes. Read more. 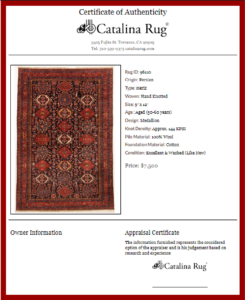 One-of-a-kind and knotted by hand – each rug is hand woven by an expert weaver with their own unique skill & experience, which means no two rugs are ever the same. Own a one off piece of floor-art. Read more.

Professionally washed –  every rug is dusted, washed, bathed in sunlight, washed again, placed back in sunlight, and washed again – then checked, trimmed, checked again and prepared for sale. Antique or New, your rug will be spotlessly clean.

Free shipping – free delivery on all purchases. For a friction-free, better shopping experience.

Free returns – you’re fully-covered by the BEST return policy in the industry: return any rug, for any reason – 100% free.

30 day money back guarantee – see how your rug looks and feels at home, and if you don’t like it, get your money back in full – no questions asked.

Risk-free purchase – most people LOVE their rugs, but if for some reason you don’t. Find another rug more suitable or get all your money back. Enjoy free shipping, free returns and 30 days to decide.

Fast service: “Rug to Door” in 2-5 days in the continental US. Order any rug and see it inside your home within days.