Kashan rugs are manufactured in the town of Kashan, which is situated in the Isfahan province in the center of Iran. The rulers of the Safavid dynasty used this town as their holiday getaway, leaving behind a legacy of holiday homes featuring stunning architecture. The rugs manufactured in the town of Kashan are just as beautiful and are often considered as some of the most fascinating of all Persian rugs.

Most Kashan rugs are made with a wool pile on a cotton base. Because the town lies in the middle of a desert with no proper source of water, the materials sourced locally were not the best quality. Importing Merino wool from Manchester in the UK changed all that. Using this high quality wool, weavers were able to produce some of the finest rugs in the region. However, importing wool all the way from Manchester was turning out to be very expensive in the long run.

The more recent Kashan rugs are produced using wool obtained from the nearby city of Sabzevar, which has earned a reputation for producing some of the highest quality wool in Iran.

How Are Pakistani Kashan Different From Persian Kashan?

When comparing Pakistani and Persian Kashans, you will see that not only do they have different designs but the colors used are also different.

Persian Kashans typically have a medallion-and-corner pattern, which is said to be inspired by the leather covers of the Koran. These covers were in turn inspired by the elaborate patterns that can be seen adorning the domes of mosques. These designs were woven in bright colors such as blue, burnt orange, red, yellow and green.

Pakistani Kashans on the hand feature designs that were inspired by the Moguls and the colors are usually pastel shades such as pale blue, fawn, beige, and champagne. Even if the weaver used a rich shade, they toned it down so it would appear more pastel and not bright.

What Is A Shah Abbas Field?

Shah Abbas field is the term used to describe a highly ornate and heavily patterned garden-like field that consists of numerous curvilinear floral forms placed in a continuous series. The name is a tribute to Shah Abbas, the principle monarch of the Safavid Dynasty, who did a lot to promote Persian textile art around the 16th and 17th centuries.

How To Know If It’s A Kashan Rug?

Kashan rugs can be distinguished by their high quality materials and elaborate, intricate designs. They are created using soft wool and many have pure silk incorporated into their designs. Most rugs feature a notable central medallion surrounded by Persian floral motifs.

The knot count of these rugs is also on the higher side, ranging from 100 kpsi to as much as 800 kpsi. Weavers used the Senneh or asymmetrical double knot in weaving these rugs. This technique of knotting resulted in finished pieces being denser and heavier than most other rugs. After the rug is completed, the wool pile is typically cut short so the outline of the design is clearly visible. 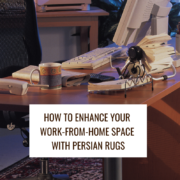